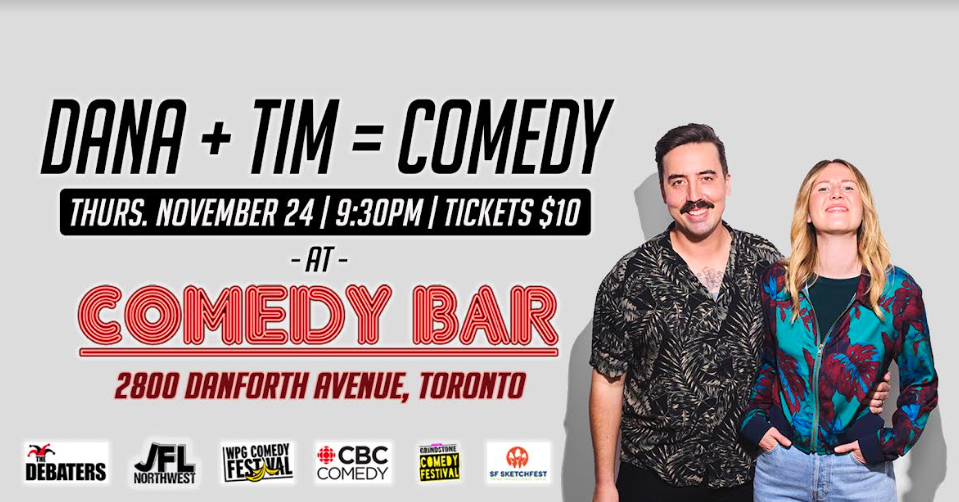 In 2018 Dana Smith and Tim Gray debated whether or not the two of them should get married on the CBC Radio program "The Debater's". They left their marital fate up to 1400 strangers in Winnipeg and it was close. Since then, the two have toured across Canada performing stand-up comedy together and appeared twice more on "The Debater's". It will be a night of laughs, love, and terrible relationship advice.

More about Dana and Tim...

Dana Smith has been performing stand-up comedy across North America for over 10 years. She has been featured on CBC's The Debater's, Winnipeg Comedy Festival, Just for Laughs Northwest, Chicago Sketchfest, San Francisco Sketchfest, etc.. Her debut stand-up comedy album “I'll Smile At Your Funeral” was released on Howl & Roar Records in October, 2021. Dana is also a member of 5-star sketch comedy group HUNKS and can be heard on their bi-weekly podcast (The HUNKS Podcast) and their YouTube channel.

Tim Gray is a stand-up comedian who has been entertaining crowds for over 14 years. His debut stand-up album "You Gotta Laugh" is regularly played on Just for Laughs Canada on SiriusXM. He has appeared on the CBC Radio's "The Debaters" 3 times, San Francisco Sketchfest, Chicago Sketchfest, Toronto Sketchfest, etc. In 2022 he made his headlining debut at Rumor’s Comedy Club. He has also opened for Nikki Glaser, Mark Forward, Bruce McCulloch and one time he saw Puff Daddy at an airport Burger King. He's also a member of the sketch comedy group HUNKS.