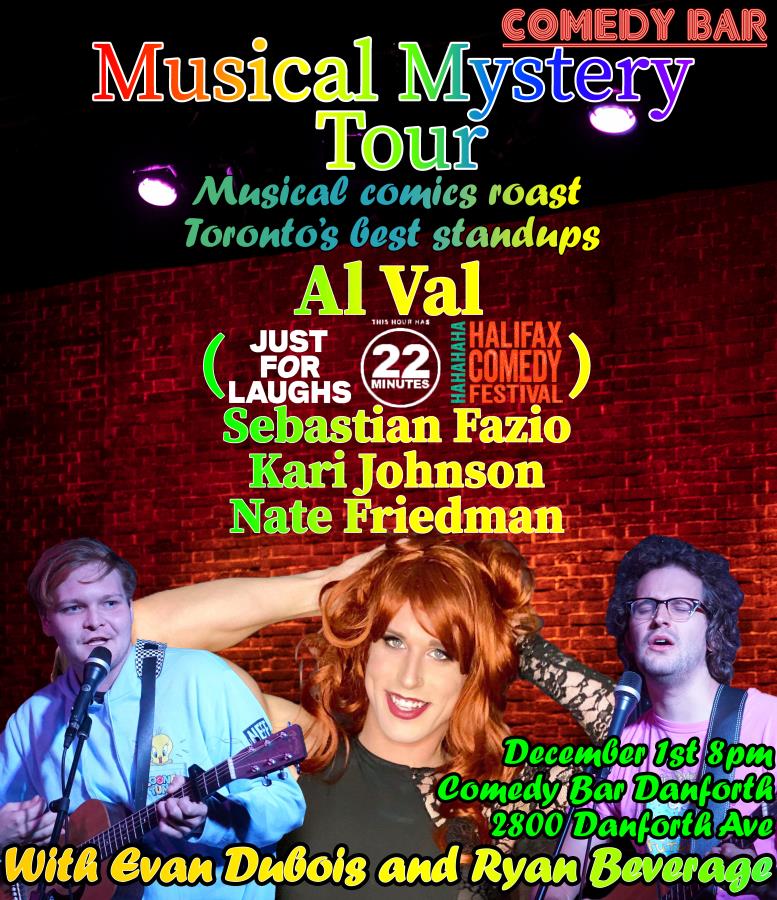 The Musical Mystery Tour is produced and hosted by musical comics Evan Dubois and Ryan Beverage! This show will feature different stand-up comedians doing their best 7 minutes of material, and after each set Evan or Ryan will improvise a funny song based on the comics performance.

This show is headlined by Al Val (Just For Laughs, This Hour Has 22 Minutes, Halifax Comedy Festival)

*Evan Dubois is a 22 year old witty ginger with a guitar. With his mix of stories, observations and songs, there is always something for everyone! He recorded his debut comedy album with Cottage Comedy Digital this August at Comedy Bar, performs regularly at clubs like Yuk Yuks, and recently ran a Toronto Fringe show!*

*Ryan Beverage has produced three musical comedy-themed shows in Toronto called Treble Clef. He started in England, where he was part of the Soho Theatre group of young comics, before going on to perform at the Edinburgh Fringe comedy festival. He moved to Canada in 2019.*
The rest of the lineup:
Sebastian Fazio

Sebastiano is a comedian and writer from Toronto Ontario known for his snappy oneliners and self deprecating style. He’s recently taken to putting on his owned themed roasts, such as Marvel vs DC Roast Battle that recently played to packed houses at Fan Expo Canada and Ottawa Comic Con”

Kari is a stand-up comedian and writer based in Toronto but has performed in festivals all over the world. Her imaginative observations center around her racial ambiguity, wearing thongs and anything else that might justify her liberal arts degree. Follow her @karigejohnson for more.Nate

Nate Friedman is an actor and comedian from Toronto. He loves silly dumb jokes and characters. He's a Second City and Humber college comedy graduate whose credits include: Fringe Festival Toronto, Orlando Comedy Festival and most recently the Austin Comedy Film Festival.
$12 online, $15 at the door