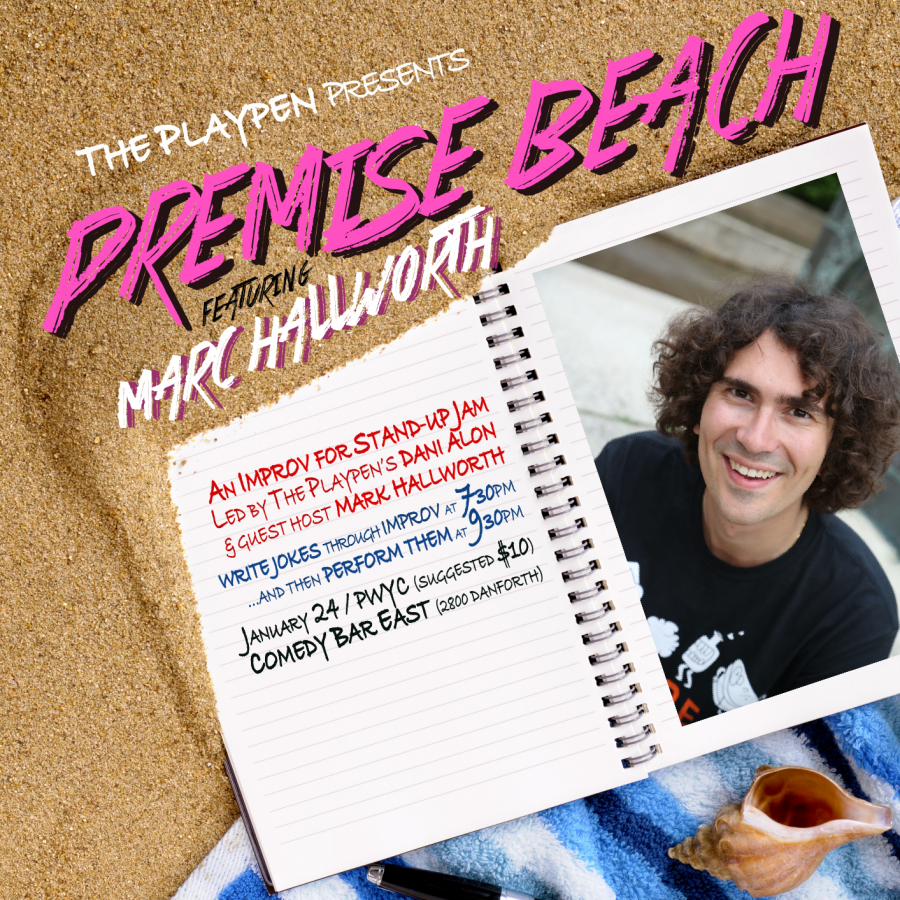 Are you an improviser who wants to take the plunge into stand-up, but nervous about writing jokes or doing your first mic? Or a comic who wishes they could add more spontaneity or stage presence into your delivery?

This week’s jam focuses on our INSECURITIES (how we look, our bad habits, things we don’t understand, etc), so bring all your ideas plus a pen and paper… …And then at 9:30, you get to put what you learned on its feet at the Premise Beach Showcase (totally optional of course).

Invite your friends and family to cheer you on!

Got questions? Shoot us an email at the.playpen.improv@gmail.com

Dani Alon is an improv and stand-up comedian based in Toronto, and a graduate of the Second City Conservatory in Toronto and iO Theatre in Chicago. From 2014 to 2021, she was co-founder and artistic director of the Improv Embassy, Ottawa's only theatre and school for improv, sketch and stand-up, where she taught students of all experience levels. She has led workshops at Florida Studio Theatre in Sarasota, FL and at Bristol Improv Theatre in Bristol, UK, and has facilitated corporate sessions for various organizations including CMHC, CHEO, PricewaterhouseCoopers, IBI Group, Ericsson Canada. Dani hosts and facilitates The Playpen, a workshop-style longform improv jam on the first Monday of the month at Imperial Pub.

Marc Hallworth has been described as "too poor for how happy he is”. In 2009, Marc moved from Calgary to Toronto, where his goofy persona, energetic storytelling, and positive outlook have been a hit with general audiences. Currently a rostered comedian with Yuk Yuk’s, Marc has opened for The Sklar Brothers (The Purge), Aparna Nancherla (the Bollywood Monster Mashup) and Jackie Kashian (The Far From Here Comedy Festival), has appeared on SiriusXM Radio as part of “Canada Laughs,” and was chosen to host the Ontario Celebration Zone as part of the PanAm Games. In 2022, Marc released his first comedy album, “Happy Pappy”, available on iTunes, Spotify, and Apple Music.