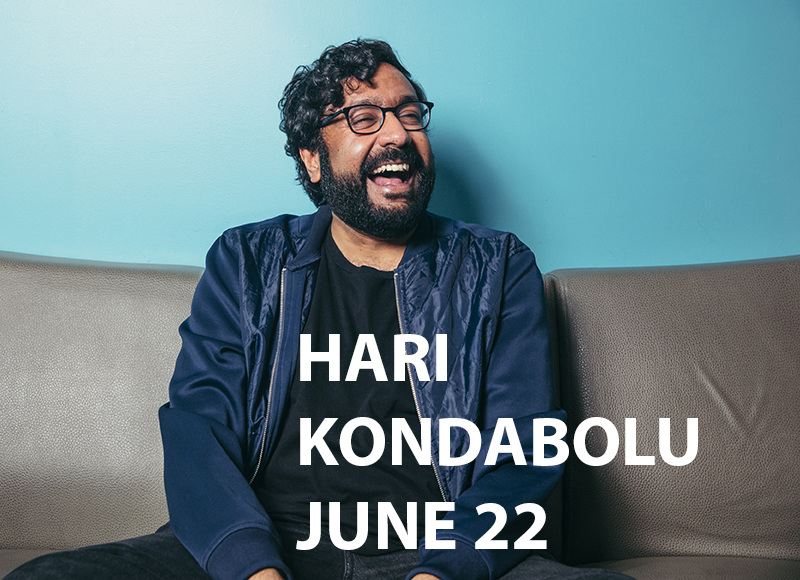 Empire Comedy Live is excited to present a very special night with Hari Kondabolu live at Comedy Bar's original Bloor Street location (945 Bloor St W at Ossington Station)
Hari Kondabolu is a comedian, writer and podcaster based in Brooklyn. The NY Times called him “one of the most exciting political comics in stand-up today” and described his 2018 Netflix special Warn Your Relatives as “an incisively funny and formally adventurous hour that reveals a comic in command of his powers.” The special was named on many “Best of” lists, including for Time, Paste Magazine, Cosmopolitan, E! Online, and Mashable. He was also named one of 2018’s “Comics To Watch” by Variety.
In 2017, his truTV documentary The Problem with Apu was released to critical acclaim and spurred a global conversation about race and representation. The Nation called it “a devastating critique of the ultimate comedic sacred cow: The Simpsons.” It is now used in high school, college and grad school curriculums around the US.
Hari has also released two comedy albums, Waiting for 2042 & Mainstream American Comic with legendary indie rock label Kill Rock Stars. Additionally, he has performed on such shows as Conan, Jimmy Kimmel Live, and The Late Show with David Letterman among many others.
He is also a former writer & correspondent on the much loved, Chris Rock produced FX show Totally Biased with W. Kamau Bell.
A regular on the public radio, Hari is a panelist on the NPR game show Wait Wait... Don’t Tell Me. As a podcaster, he co-hosted the popular Politically Reactive with dear friend W. Kamau Bell.
Additionally, he also co-hosts what he politely describes as a “pop up podcast,” The Untitled Kondabolu Brothers Podcast with his younger brother Ashok (“Dap” from HBO’s Chillin’ Island and defunct rap group Das Racist.)
Hari attended both Bowdoin College and Wesleyan University, graduating from the former institution with a B.A. in Comparative Politics.
A former immigrant rights organizer in Seattle who worked under the leadership of now-Congresswoman Pramila Jayapal, Hari also earned a Masters in Human Rights from the London School of Economics in 2008. He was the “Artist In Residence” at NYU’s APA Institute for the 2014-2015 Academic Year and at Shangri La Museum in Honolulu in 2018.